Following 10 years of proven success in raising awareness among parents, grandparents and carers about the dangers to children of inappropriate or incorrectly-fitted child car seats; a new-look Good Egg In-Car Child Safety campaign for 2011 launches on Monday the 27th of June. 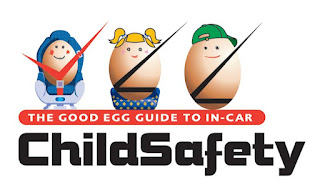 This long-running campaign has been endorsed by road safety authorities as having played a key part in cutting child road casualties over the past decade. Director of Road Safety Scotland, Michael McDonnell says: “We have seen the number of children killed or seriously injured in cars fall by 72%1 over the past ten years which marks a welcome contribution to the GB Government target of a 50% reduction2. This is a tremendous success story which I believe could not have been achieved without the Good Egg campaign.

“With even more challenging targets for child casualty reduction set by the Scottish Government for 2020, the Good Egg campaign will clearly be an essential element in our strategy for delivering these targets in the years ahead”.

Superintendent Alan Duncan, Lead Officer for the Association of Chief Police Officers in Scotland (ACPOS) National Campaigns said: “Recent figures show a fall in child passenger casualties which is encouraging. However, we are still finding children who are either not wearing seatbelts or who are restrained by unsuitable or incorrectly-fitted car seats. We fully support the Good Egg Campaign which helps to educate drivers about their responsibilities in relation to in-car child safety and provides practical advice to ensure children are kept safe whilst on the move.”

According to campaign organisers, this year’s campaign will be the biggest yet with high-profile radio and online advertising backed up by extensive social media activity on Facebook and Twitter. The campaign will also build on the past success of Good Egg car seat clinics where parents can have the safety of their child seats checked out by experts at convenient locations across Scotland.

As Chairman and Chief executive of The Arnold Clark Group, which has sponsored the Good Egg Campaign every year since its initial national launch in 2002, Sir Arnold Clark commented: “As a father, grandfather and great grandfather, I am very conscious that children must be kept safe when they are travelling in a car. It doesn’t take much time to check that a car seat is fitted properly and it will always be too late after a collision. I therefore urge parents to go to a Good Egg clinic to ensure that their child seats are fitted safely – it could ultimately save their child’s life.”

For more information about the 2011 Scottish Good Egg In-Car Child Safety Campaign, to join the Facebook page or to find out what’s happening in your area, go to www.protectchild.co.uk.
Posted by Trevox at 14:46